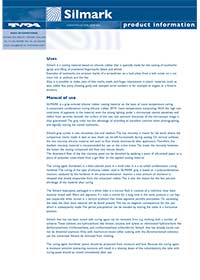 SILMARK is a gray-colored silicone rubber casting material. With the high concentration of pigments in the material, even the strong lighting under a microscope cannot penetrate and reflect from particles beneath the surface of the cast, and optimum sharpness of the microscopic image is thus guaranteed. The gray color has the advantage of providing an excellent contrast when photographing and digitally storing the casted toolmarks.

Silmark is a casting material based on silicone rubber that is specially made for the casting of toolmarks (gray) and lifting of powdered fingermarks (black and white). Examples of toolmarks are striation marks of a screwdriver on a lock plate, from a bolt cutter on a cut chain link or padlock and the like.
Also, it is possible to make casts of bite marks, teeth, and finger impressions in plastic materials (such as wax, edible fats, putty, chewing gum), and stamped serial numbers in for example an engine or a firearm etcetera.

SILMARK is a gray-colored silicone rubber casting material on the basis of room temperature curing 2-component condensation curing silicone rubber (RTV- room temperature vulcanizing). With the high concentration of pigments in the material, even the strong lighting under a microscope cannot penetrate and reflect from particles beneath the surface of the cast, and optimum sharpness of the microscopic image is thus guaranteed. The gray color has the advantage of providing an excellent contrast when photographing and digitally storing the casted toolmarks.

Silmark gray comes in two viscosities, low and medium. The low viscosity is meant for lab work, where the comparison marks made in lead or wax sheet can be left horizontally during casting. On vertical surfaces, the low viscosity silicone material will start to flow slowly downwards after application. Therefore, the medium viscosity material is recommended for use on the crime scene. The lower the viscosity, however, the better the casting compound will flow into minute details.
The downward flow of the low viscosity paste can be dimished by applying a piece of siliconized paper or a piece of polyester cover-sheet from a gel lifter on the applied casting material.

The curing agent (hardener) is a blue-colored paste in a small tube. It is a so-called condensation curing hardener. The curing of the type of silicone rubber used in SILMARK gray is based on a polycondensation reaction, catalyzed by the hardener. In the polycondensation reaction a smal amount of methanol is released that slowly evaporates from the vulcanized rubber. This is also the reason for the few percent shrinkage of the material after curing.

The Silmark base-paste, packaged in a white tube, is a viscous fluid. It consists of a colorless, clear basic material mixed with fillers and pigments. If a tube is stored for a long time in the same position it can happen (especially when stored in a vertical position) that these pigments partially precipitate. On squeezing the tube, the clear basis material will be found present. This has no negative consequences for the cast which is subsequently made. The partial precipitation can be avoided by storing the tubes in a horizontal position.

Silmark that has not been mixed with curing agent can be removed, from e.g. clothing, with a number of solvents. These solvents are hydrocarbons like thinner, toluene, and xylene or chlorinated hydrocarbons like dichloromethane, trichloroethane, and trichloromethane (chloroform). Silmark that has already cured, cannot be dissolved anymore. Only with mechanical means (after soaking with the aforementioned solvents) can the vulcanized Silmark be removed from clothing.

The curing agent (hardener paste) should be protected from moisture and heat. Because the curing agent is moisture sensitive (attracting moisture will result in a slowing down of the vulcanization), the tube with curing paste should be closed immediately after use.

For the curing of the silicone rubber, however, a small amount of water is present in the base material. When casting is done is done in a hot and dry climate, the necessary amount of water might evaporate from the surface before the curing is complete. Then the surface that was exposed to the air will remain tacky. If this is noticed, local moistening of the air around the cast is needed. For exmample by holding a plastic cup with a wad of moist towel paper on the bottom over the cast.

The necessary amount of curing agent depends on the temperature and the amount of time available. The more curing agent is used, the faster the vulcanization will proceed. The curing time is defined here as the time from which mixing of the Silmark with curing agent is started, until the time a rubber is obtained that will not deform permanently when removed from the mark or object.
Vulcanization will proceed after this time, so that after a while the rubber is firmer than at the indicated curing time. Obviously, a cast from a deep knick in wood should be left longer to be able to withstand the pulling force needed to remove it without deformation.
The temperature at which the Silmark is used, is very important. The vulcanization, catalyzed by the curing agents, is a chemical reaction. As a rule of thumb, every 10 °C change (18 °F) in temperature will slow down (at lowering of the temperature) or accelerate (at raising the temperature) a chemical reaction by a factor of circa three. A change of 20 °C will therefore result in an acceleration or slowing down of a chemical reaction by a factor of circa nine. With this rule, the approximate curing time at other temperatures can be estimated from the time for use at room temperature (20 °C).

When the Silmark base paste is mixed with the hardener for a short time the viscosity of the mixture doesn't increase. Only after this "incubation time" the polycondensation reaction starts. When the Silmark has to be used at low temperature it can therefore be helpful to mix base material and hardener inside, wait a little bit and then apply the mixed paste on the cold surface that needs to be cast.

When equal lengths of Silmark paste (medium viscosity) and curing agent have been squeezed from their respective tubes, a mixing proportion of circa 7% curing agent to base material is obtained. When time and temperature permits, try to use 2/3 the length of curing agent with regard to base material. This will result in a curing time of 6 to 9 minutes at room temperature. The more hardener paste is used the more the cast will "sweat" after a couple of days. On the cast a thin layer of an unknown substance will appear. It is not methanol, the compound formed in the polycondensation reaction because that would evaporate.

The Silmark hardener paste should be mixed well with the grey Silmark paste. This will take approximately 1 minute. Because of the high pigment content of the Silmark paste, there is no visual check if the mixing is complete (in contrast to materials for dental use). To be sure that the mixing is complete, mix thoroughly for ample time. Incomplete mixing will increase the curing time because there will be parts in the cast with less hardener than the rest so need a longer setting time.

Certain brands of silicone release paper can bond strongly with Silmark after is has been mixed with curing paste during the curing itself. Since the bonding occurs with the release side of the paper the non-treated side of the paper can be used for writing. This way one can mark the casts and also get a nice flat part of the cast for easier mounting it steady under a microscope. This characteristic can also be used in another way. On top of a certain amount of Silmark mixed with curing paste a piece of silicone release paper is put and then a roller used to distribute the silicone paste over the surface that you want to cast while making sure it stays underneath the paper. An example of this use is casting of striation marks on plastic bags with black silicone paste.

Another way of marking a cast is putting a piece of string through the hole in a packing label and put a knot in it. Then embedding the knot in the cast before it is fully cured.

To lower the viscosity of all SILMARK casting materials (including white and black), a small amount of diluant (up to about 20%) can be added and mixed in before adding the hardener. The curing time consequently will be longer and the rubber obtained will be less strong.

On casting of tool marks in dry wood, e.g. in case of a forced door or window, there is a danger that the paste will immerse the wood grains, resulting in adhesion of the cast to the wood. Upon removal of the cast then, either the rubber will tear or wood grains will be torn off. To avoid this, the porous wood should be sprayed, before casting, with silicone release agent (C-6000). After the wood has been sufficiently saturated, the Silmark paste (mixed with curing agent) can be applied.