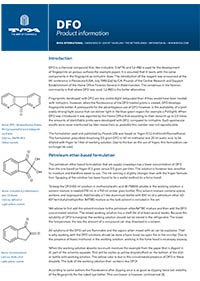 Main Uses: Latent and Bloodmarks on semi-Porous and Porous surfaces

DFO is a reagent that (like ninhydrin) reacts with the amino acids present in fingerprints. The areas of application are the same: porous surfaces like paper, unpainted wood and the like.
A fingerprint developed with DFO is less visible in white light than after treatment with ninhydrin but with green light (about 530 nm), it fluoresces strongly. The fluorescence is viewed and photographed through orange or red filter (goggles).

DFO is a chemical compound that, like ninhydrin, 5-MTN, and 1,2-IND is used for the development of fingerprints on porous surfaces (for example paper). It is assumed that it reacts with the same components in the fingerprint as ninhydrin does. The introduction of the reagent was announced at the IAI conference in Pensacola (USA, July 1989 [2a]) by C.A. Pounds of the Central Research and Support Establishment of the Home Office Forensic Service in Aldermanston. The consensus in the forensic community is that where DFO was used, 1,2-IND is the better alternative.

Fingerprints, developed with DFO are less visible (light red/purple) than if they would have been treated with ninhydrin. However, when the fluorescence of the DFO treated prints is viewed, DFO develops fingerprints better. A prerequisite for the advantageous use of DFO however, is the availability of a (preferably strong) light source that can deliver light in the blue-green region (for example a Polilight). When DFO was introduced it was reported by the Home Office that according to their research up to 2.5 times the amounts of identifiable prints were developed with DFO, compared to ninhydrin. Such spectacular results were never mentioned by later researchers so probably this number was not reproducable.

The formulation used and published by Pounds [2b] was based on frigen (1,1,2-trichlorotrifluoroethane). The formulation prescribed dissolving 0.5 gram DFO in 40 ml methanol and 20 ml acetic acid, to be diluted with frigen to 1 liter of working solution. Due to the ban on the use of frigen, this formulation can no longer be used.

The petroleum ether based formulation that we supply nowadays has a lower concentration of DFO than the one based on frigen (0.3 gram versus 0.5 gram per liter). The solution is however less sensitive to moisture and therefore easier to use. The ink running is slightly stronger than with the frigen formulation. Spraying of the solution has been found to be a useful method (in a fume hood).

To keep the DFO (60 ml solution in methanol/acetic acid (B-79800) soluble in the working solution, a solvent mixture is needed (110 ml, in a 150 ml amber glass bottle). This solvent mixture contains xylene, acetone, and isopropanol. Additionally, a 1 liter aluminium bottle with 830 ml of a petroleum ether 40-60°/tert-butylmethylether (MTBE) mixture as the bulk solvent is included in the set.

We advise to first add the solvent mixture to the petroleum ether/MTBE mixture and then add the DFO concentrated solution. The mixed working solution has a shelf life of at least several weeks. Because the solubility of DFO is marginal, the working solution should not be stored in the refrigerator. The lower the temperature, the less the amount of a compound can stay dissolved in a solvent.

All solutions of the DFO-set are flammable and the vapors when mixed with air can be explosive. That is why working with the DFO solutions should be done a fume hood (no open fire in the vicinity). Due to the presence of (toxic) methanol in the working solution, working in the fume hood is necessary anyway.

When the working solution absorbs too much moisture (for example from the paper that is dipped in it), part of the solvents separate. This will be visible as yellow droplets/fluid on the bottom of the dish or bottle with working solution. The yellow color is due to the concentrated presence of DFO in these droplets. The bulk of the working solution then contains less DFO!

According to some authors the fluorescence after dipping once is as good as dipping twice but visibility of the fingerprints for the naked eye better. This conclusion is however controversial [3].

The formulation researched and published by the HOSDB (later called called CAST and subsequently merged into DSTL) at the beginning of the century [8, 11] uses a mixture of HFE7100 and trans-1,2-dichloroethene as the bulk solvent. This formulation is quite sensitive to moisture (producing a two-layer system with the DFO rich layer on top starting as oily droplets on the surface).

HFE7100 is a fluorinated compound with a GWP of 320 (CO2 = 1, methane 28) that does not damage the ozone layer but also does not degrade readily in the environment. The DFO concentration in this formulation is 0.25 g per liter. A set for 1 liter consists of a concentrated DFO solution of 0.25 g DFO in 30 ml methanol and 20 ml acetic acid.
Working solution prepared from mixing the concentrated DFO solution and bulk solution can be used for about a month.

The treatment of papers with DFO is analogous as with ninhydrin. That means papers can either be sprayed with, brushed on, or dipped into the solution. If you choose to dip papers twice, allow a short time span in between dippings for drying (around a minute). Special attention should be given to drying in view of the explosive nature of the solvent/air mixture in case of the petroleum ether formulation. Therefore, keep the papers in the fume hood till they are dry. HFE7100 is not retained by activated carbon so only non-circulating fume hoods can be used.

After the DFO is applied to the paper, the reaction between DFO and the compounds in the fingerprint still has to take place. At room temperature this reaction is extremely slow. Therefore the treated papers need to be heated in an oven (after drying well, to exclude the possibility that an explosive solvent/air mixture is formed in the oven) for about 20 minutes at 100 °C. At first [2] a heating period of 10 minutes was prescribed, nowadays a period of 20 minutes is commonly advised (see for example [3 and 4]). According to some authors (see for example the articles of Milutin Stoilovic and Jeff Myatt [5, 12]) found that a higher temperature during a short time works better (higher fluorescence). Stoilovic used a dry ironing press (medium cotton position) of which the temperature when closed is about 180 °C for only 10 seconds. Jeff Myatt used a heat transfer press.

In 2002, a publication by English researchers [8] described two formulations that would be about as effective as the "old" frigen-based formulation. A drawback of both formulations is the high cost of the fluorinated solvents and the trans-1,2-dichloroethene used and the likely short shelf-life of the working solution due to moisture sensitivity.

An alternative way of applying DFO, with which we have no experience by the way, is the use of "dry DFO". This method was presented at the the IAI conference in Phoenix (1994, [9]). First, sheets of filter paper are saturated with DFO solution (1 g DFO, 200 ml methanol, 200 ml ethyl acetate, and 40 ml acetic acid) and then dried. The document that has to be treated is positioned between two sheets of DFO treated filter paper and then everything is wrapped in a towel. A steam iron, filled with a 5% solution of acetic acid in water (about the strength of house hold vinegar) is positioned on the towel and left steaming for 1 minute (cotton setting). The steam iron is not moved in this time period. After that, the steam iron is moved to a place that has not been treated before and the procedure repeated until the whole document has been treated. Fingerprints would be less visible than after treatment with DFO solution. However, the author claims that the fluorescence is just as strong. The advantage of the method would be that there is no ink running and no background fluorescence of the paper.

The fluorescence of DFO already occurs at room temperature (unlike ninhydrin/zinc salt, which often only fluoresces when cooled to liquid nitrogen temperature). DFO fluoresces in the orange/red region (use a 590 to 610 nm cut-off filter) after excitation with blue-green or green light. The optimum excitation wavelength is around 530 nm (green), but DFO will also fluoresce after excitation with lower or higher wavelengths. In practice it was found that fluorescence of fingerprints is diminished or even disappears by the action of ambient air humidity (as was assumed to be the cause). After reheating, the fluorescence was reported to be restored.

Sequential use of DFO and ninhydrin

It has been found that for unknown reasons a small percentage of fingerprints (about 10%) is not developed with DFO, but is with ninhydrin. After documenting and photographing all prints after treatment with DFO it is therefore advised to treat papers with ninhydrin afterwards.

The reverse mode of operation (DFO after ninhydrin) does not produce fluorescent fingerprints. However in several cases (see e.g. [6]) prints have become visible that did not show up after using ninhydrin. Also prints became more contrasty after treatment with ninhydrin and DFO sequentially (see for example the research of the Southern California Laser Study Group, [10]). It can however also happen that an already visible print disappears during treatment with DFO (presumable by dissolving). To us it does not seem advisable to use a DFO solution that has been used to treat ninhydrin treated papers again for new documents that should yield fluorescent prints. Probably the DFO solution contains so much ninhydrin extracted from the paper, that a mixed reagent has been created. This mixed reagent might give non-visible, non-fluorescent fingerprints. Presumably, spraying of the DFO reagent might be the best option for the sequential treatment of DFO after ninhydrin.

According to the Institut de Police Scientifique et de Criminology of the University of Lausanne, prints developed with DFO can be treated with zinc chloride solution (analogous to ninhydrin developed prints). After application of the zinc chloride solution, drying and heating during 10 minutes at 100° the prints are said to be slightly stronger in color and the fluorescence slightly better [3].

A disadvantage of this zinc treatment is that a subsequent treatment with ninhydrin is not useful anymore [4]. 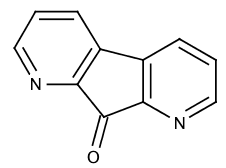