To find blood traces, even outside or in a room that has been cleaned, luminol is very useful. The two solutions of 100 ml each in the set with the "classic" Weber formulation are mixed before use, diluted with 800 ml of distilled water in which the two tablets of urea-hydrogen peroxide were dissolved  to provide 1 liter of working solution.
The working solution (which can be used for only a couple of hours (up to 24 hours after mixing) is sprayed on the area that has to be examined.

The luminol set F-31000 is based on a Dutch recipe. It is more concentrated than the classic Weber recipe and gives a stronger luminescence.

Blood traces, even very diluted ones, cause the luminol and the hydrogen peroxide in the solution to react with each other. This reaction is unique, in that it releases (white-green) light. The reaction lasts several minutes and can even be photographed (in complete darkness) or taped on video (using a light amplifier or "night vision equipment" connected to the video camera).
The solution causes blood traces to run.

Wash basin with no visible traces of blood.

Luminol is a reagent that emits light when it comes in contact with blood. The first article that proposes to use it as a forensic tool was published in 1937 [1]. The phenomenon that light is emitted in a chemical reaction is called chemiluminescence. When a blood stain is sprayed with luminol the chemiluminescence lasts from about 10 seconds to several minutes. Although the intensity of the blue-white light (peak emission around 455 nm [7]) is not high, it can be photographed using longer exposure times. By respraying the stain with luminol the chemiluminescence will be seen again. The luminol reagent is not a fixative though and therefore the stain will slowly start to run. Especially after multiple applications.

From the description above it will be clear that succesfull searching for blood (and especially photographing the luminescence) can only be done in complete darkness. So either one has to work during the night or one has to able to completely darken the crime scene.

Luminol can be used for:

The luminol set F-3000 (for 1 litre working solution) is based on a well known and often used recipe (K. Weber, 1966). The set F-31000 (for 0.5 liter working solution) is on the basis of more concentrated Dutch recipe that was presented on the SPTM conference in Stockholm [3] and the IAFS conference in Los Angeles [4] in 1999 as well as discussed in several articles in the Dutch magazine Modus [5].

The Dutch recipe has a (more concentrated) composition that provides a stronger chemiluminescence than the classic Weber recipe. Although stronger the (inevitable) DNA degradation of the blood traces is limited to an acceptable level.

After preparing the working solution it can be used for several hours (at room temperature, the lower the temperature the longer the solution lasts). In contact with blood, that acts as a catalyst the luminol reacts with hydrogen peroxide and releases a molecule of nitrogen and (sometimes) light. The end product is 3-aminophthalic acid (more accurately sodium salts of it because of the basic solution). The lower the temperature the less luminiscence is seen.

The working solution needs to be sprayed over the area to be investigated with a very fine mist. Because some of the blood will dissolve in the droplets thereby diffusing the trace fine droplets (mist) give the best result.

The best results are obtained with spray equipment used in car refinishing and/or air brushes. A source of compressed air at the crime scene is than a requisite. For all spray equipment it is best that they contain no or as little as possible metal parts because metals and metal oxides can also catalyze the reaction between luminol and hydrogen peroxide.

Directions for use strong recipe F-31000

This set contains of one solution (containing luminol and sodium hydroxide in water) and two tablets urea hydrogen peroxide complex. Adding the two tablets to the solution (or one tablet to half of the solution) and dissolving them makes up the working solution (0.5 liter).

Because of the higher concentrations of the chemicals in this recipe spraying the solution in a fine mist is even more important that with the classic recipe.

It is not only blood that catalyses the reaction between luminol and hydrogen peroxide. Certain plant enzymes (broken stems, trampled grass, damaged fruits), materials (like jute, sisal, rust, copper oxide, certain paints [6]), as well as oxidants like household bleach will do that.
False positive reactions can sometimes be differentiated from those of blood because of a slight color difference and/or shorter duration of the luminescence. The color difference can be seen with spectrometers but is difficult or impossible to see with the naked eye.

Interference of the most common false positive, bleach, can be prevented. The hypochlorite found in bleach decomposes after drying in one to several days [10]. If bleach contamination is suspected the best option is to wait a day or longer before examination with luminol. Another option is to use the Grodsky luminol formulation (luminol, sodium carbonate, sodium perborate in water [11]) with 0.1 mol/L 1,2-diaminoethane (6 gram/liter) [10]. The 1,2-diaminoethane reacts faster with the residual bleach than the reaction of luminol with bleach. It also decreases intensity and duration of the luminescence somewhat.

To avoid false positive areas to be sampled for DNA the suspected stain can be tested with other indicative tests for blood. The Dutch forensic institute NFI recommends the tetra base test [8].

Mixing a small amount of fluorescein or reduced fluorescein with the luminol working solution will give a green fluorescence (peak emission around 520 nm) instead of a blue-white one and is reported to be actually stronger than that of luminol alone. With Rhodamine-B a violet color is obtained (see also youtube.com for demonstrations in flasks or beakers).
See references 12 for a number of scientific articles related to the phenomenon.

The luminescence of luminol can be recorded photographically although a large lens opening and long exposure times will be necessary. Several sprayings (with possibly concomitant running of the blood stain) might prove necessary also.

Video recording is possible but needs an image intensifier [3, 5b, 9] to be useful.

[1] Luminol was proposed for the first time as a forensic tool for detecting blood traces by:
Sprecht, W., "Die Chemilumineszenz des Hämins, ein Hilfsmittel zur Auffindung und Erkennung forensisch wichtiger Blutspuren", Angew. Chem. 1937, Vol. 50, p. 155-157.
The reaction supposed to yield light is the decomposition of oxidized luminol to 3-aminophtalic acid and nitrogen.
[2] For this application also reduced fluorescein ("leuco" fluorescein) can be used. This reagent makes use of the blood induced oxidation of reduced fluorescein (not fluorescent) to the highly fluorescent fluorescein. The fluorescence is induced with blue light and viewed and photographed through a yellow filter. See for example the article in Dutch by Renaat Develtere, laboratory commissionar at the Gerechtelijke Politie, Kortrijk, Belgium:
Develtere, R., "Fluoresceïne, detectiemiddel voor latente bloedsporen", Modus, 2000, Vol 9, No. 4, p. 37-39 and the references in that article.

PVC flooring with schoeprint in blood 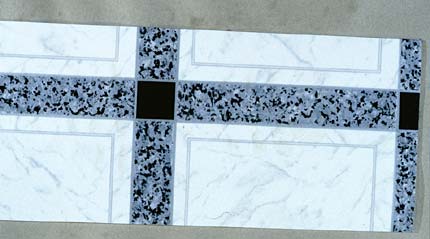 After treatment with reduced fluorescein. 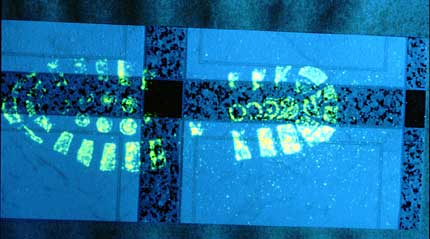 Decompositon of luminol by hydrogen peroxide and blood as catalyst.

Fluorescein (fluoresces under blue light) left, reduced fluorescein (does not fluoresce) on the right.